You can download a PDF if the picture isn’t readable:  type_assign_1

Thanks to Joe Van Cleave for the idea! (http://joevancleave.blogspot.com/) 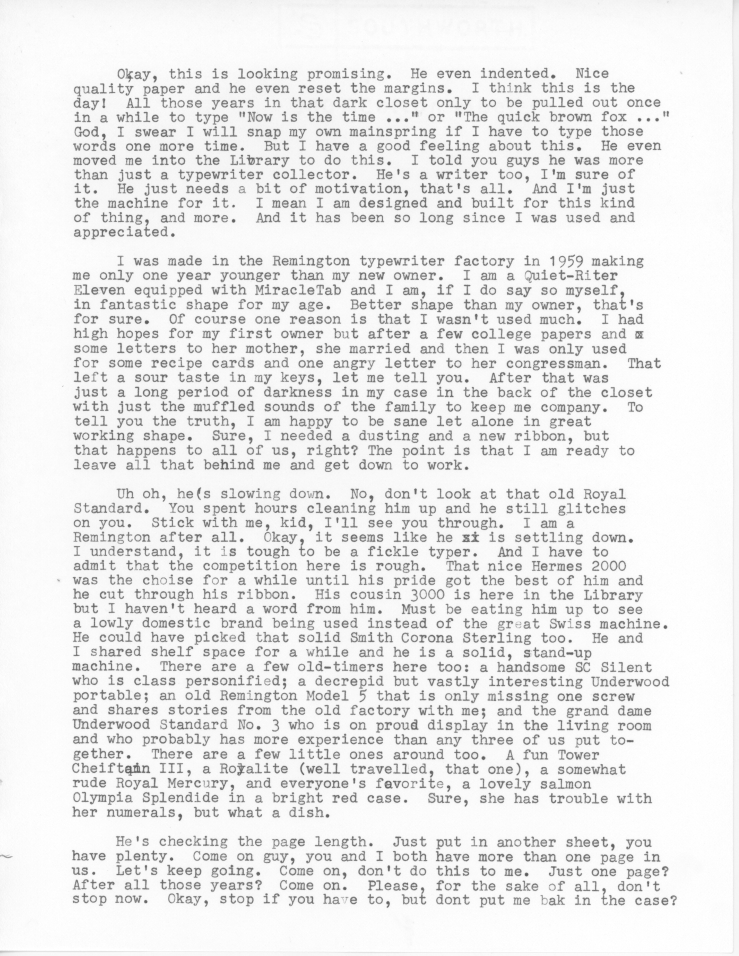 Mr. Jack Vander shocked his family and himself yesterday when he used the word quidnunc correctly in a sentence during Sunday dinner.  “I don’t know what’s gotten into him, I really don’t,” said his mother, Bertha, in between sobs. “I didn’t raise him to be like that.  And at dinner too.  In front of grandmother.  I just don’t know where we went wrong.”

Vander’s father had stronger words for his son’s behavior.   “What the fuck do you do with a kid like this?  I mean we raised him right.  Beat him when he needed it and made sure he went to church every Sunday.  Shit, how the fuck does this happen to good families like mine?”

Vander, a sign painter and part-time rodeo clown, seems as surprised as his family.  “I don’t know where it came from,” he said, “it just came out.  The only thing I can think of is that I was looking up how to spell quiche the other day, you know, for a sign, and I must’ve read the word.  I guess it just got stuck in my head.”

His longtime friend George Heply disregards that excuse.  “He’s fucked up, is all,” he said to this reporter. “I might buy it if it was the first time but it wasn’t.  I personally heard him say ‘desist’ instead of fuck-off and he’s starting to say refrigerator instead of fridge and television instead of TV.  I don’t know what the fuck his problem is, but he’d better straighten out right quick before he loses everything.  We already had to kick him out of the bowling team when we found a book in his bowling bag.  It was a hardcover, without pictures, if you can fucking believe it.”

Vander has promised to try to watch his mouth from now on, but his parents confirmed that he is no longer invited to Sunday dinner until he can control himself.  “It’s tough love,” his mother said, “but that’s what he needs right now.”

To add further mystery to this story, this was only the fourth time this month that quidnunc was properly used statewide.  It is currently on the list of words that just take up space in the dictionary and are good for Scrabble but otherwise should be expunged from the English language.   Expunge is another one.

I have to agree with a lot of people who say that you can get a lot more people to pay attention to and retain information if it is put into a humorous form.  Just look at the success of The Daily Show and The Colbert Report.  Sure, they are fake news programs, but there are kernels of truth there—or should I say truthiness—and for a lot of people those programs are their main source of news.

This method is used to great effect in this link: http://www.cracked.com/article_18611_the-10-most-important-things-they-didnt-teach-you-in-school.html The article is funny and irreverent, but it it also imparts a good bit of wisdom.  Give it a read and see what you think.